Get this game and 8 more for $28.00 USD
The Pandion EVERYTHING Bundle
View bundle
Buy Now$2.50 USD or more

Looking for a print copy?

Badger and Coyote are good friends, even though they are very different creatures and live by different rules. They find working together to achieve their goals to be beneficial, and, many times, they enjoy each other’s company. Badger is focused and determined, while Coyote wants to play and socialize as much as eating.

Badger + Coyote is an asymmetrical, GM-less duet game. Badger and Coyote are trying to survive and thrive each day with their own unique skills.

Players can speak to each other to narrate the story and the actions of Badger and Coyote, but do not directly speak in-game. Instead, Coyote uses their social skills to help direct Badger. Badger has no social skills to initiate communication, but many skills to achieve the goals of obtaining food.

We would love to hear about the wonderful mischief Badger and Coyote get into. Tag us on Twitter @PandionGames or use #BadgerCoyote to share your stories!

Get this game and 8 more for $28.00 USD
The Pandion EVERYTHING Bundle
View bundle
Buy Now$2.50 USD or more

In order to download this game you must purchase it at or above the minimum price of $2.50 USD. You will get access to the following files:

Support this game at or above a special price point to receive something exclusive.

If you are in need and cannot afford a copy of the game, help yourself to a community copy. Consider rating or reviewing the game. Every bit helps!

Badger + Coyote is a two-player rpg about mutualism. It's based on the way north american badgers and coyotes sometimes hunt and travel together, using the strengths of their differences to handle situations that they couldn't manage alone.

Badger + Coyote's PDF is 12 pages, with lush, well-integrated art and a very readable layout. Unfortunately, it's kind of lost in the downloads among a sea of nearly identically named files, most of which do not have art. The one you're looking for is BadgerAndCoyote_Singles.pdf for English. The game is also available in Spanish, which is great!

Gameplay-wise, Badger + Coyote is neat. It's an asymmetrical, cooperative game in which the Coyote character has social and sensory skills, and the Badger character is an unstoppable foraging machine.

Coyote splits their stats between hunting and socializing, and can give advice to Badger on a successful social roll. Meanwhile Badger builds a dice pool and can use it to flatten tasks. Neither character is difficult to create, but Coyote can uniquely lose the game by pushing their build too far towards socializing or hunting.

There is no GM role, since it's meant to float between the two players,  and the game handles this by having you set objectives ahead of time, and then roleplay and dice roll your way through trying to complete them. If at least one of you is comfortable with ttrpgs, you'll pick it up instantly.

In terms of resources, Badger + Coyote provides the players with a lot. There's a gorgeous character sheet, ecological information about the animals involved, and everything essential is condensed on the character sheet printout.

Probably the weirdest quibble I will ever have for a game is that I think the badgers depicted on the cover, interior, and character sheet are european badgers, not an american ones. European badgers sometimes den and cooperate with foxes and racoon dogs, but aren't native to the same range as coyotes. However, I *do not* think this will destroy anyone's immersion, and also there is a very real chance that I'm wrong about this and should not seek a career in badger identification.

Overall, Badger + Coyote is a great pastoral, naturalist duo game with stunningly beautiful art and a cool concept. If you like low stakes, Beatrix Potter or Richard Adams style storytelling, definitely grab a copy and check it out.

I wrote up a review for this game on my website! I really enjoyed it. Here's the review: https://cassimothwin.com/2022/01/25/ttrpg-review-badger-coyote/

I really like role-playing games with asynchronous mechanics, i.e. where each player doesn't play the same way (and I'm not just talking about the GM/player division). Badger + Coyote is a very cute example of that: you play as the two animals of the title who wander around the countryside looking for food, one using his social skills, the other one using his hunting skills. The goal is to find food without becoming too much of a stranger to your friend, so there are two different and combined rule systems. It's very cute, it's very pretty, and it's a very good idea, so it's a very good game. 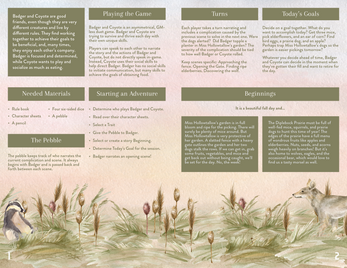 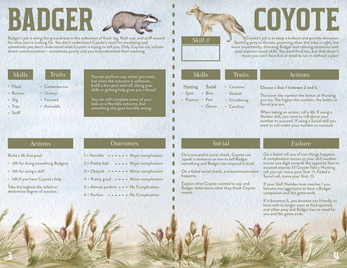 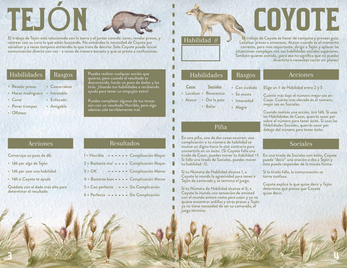 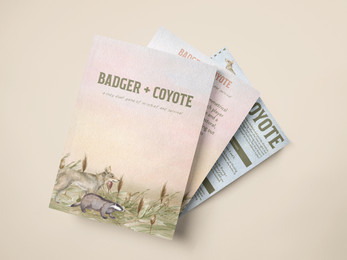